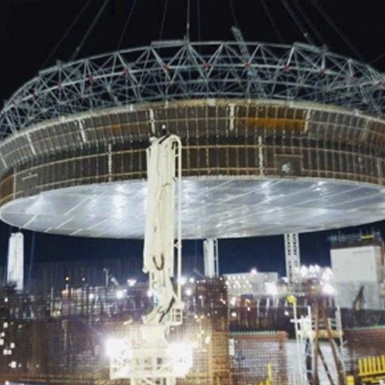 Steve Price, Lancer Scott Account Director at HPC gives the latest news on a project we are delighted and proud to be a part of.

Just before Christmas, the world’s largest crane “Big Carl” made its first major lift – a 170 tonnes pre-fabricated steel dish which will form the base of the reactor containment liner and was over 46 metres in diameter. Working to a tight weather window, the lift was completed in the early hours of December 18 completing at 4.30am. The lift involved teams from EDF Energy, Tissot, Bylor and Sarens who had planned this key activity over a number of weeks.

Work continues at Avonmouth at the Balfour Beatty segment factory which is now producing concrete segments that will form the liner of the cooling water inlet and outfall tunnels.

Also being built at Avonmouth are the inlet and outlet header structures which will eventually sit on the seabed at the ends of the cooling water tunnels. The inlet structures are massive, reinforced concrete structures, five metres tall, eight metres wide and over 40 metres long, each weighing approximately 5,000 tonnes. Six of these will be pinned to the seabed and shafts driven to connect with the tunnels below.

The construction of Unit 2 nuclear island continues, learning valuable lessons from the work already undertaken on Unit 1. During December, the first of the five big concrete pours took place. The pour took 31 hours to complete and involved the placing of 1,868 cubic metres of concrete over 476 tonnes of steel reinforcement.

Senior project managers talked to them about how plans are advancing for a near identical station at Sizewell C in Suffolk. By demonstrating the advantages of replication between Unit 1 and Unit 2 the project team was able to talk confidently about how the UK EPR design for SZC means that it can be built and financed at a lower cost for consumers.