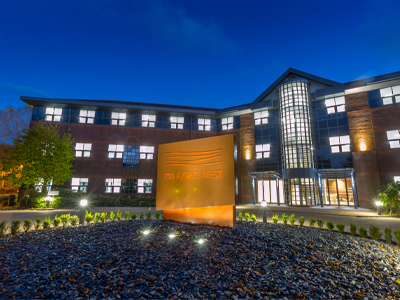 Lancer Scott were again appointed to undertake the complete strip-out, refurbishment and high quality fit out of a 40,000sq ft three storey – including Ground Floor – building but this time on the outskirts of Bristol in Aztec West.

The works consisted initially of the complete strip out to shell, inclusive of all fabric, mechanical and electrical services. Following this, all services were then relocated and reinstated but for this project, the services were installed within a suspended ceiling, which was also supplied and installed by Lancer Scott. As well as a fully comprehensive air-conditioning system throughout, a heating system was installed to the staircase areas including fire exits along with a smoke extraction system. All WC’s and shower areas were stylishly refurbished including new high end fittings and tiling. Full decorations were completed internally and externally including the internal and external decoration of all windows and fire doors.

The building was carpeted throughout excluding the reception area which was instead tiled in a feature ceramic tile. The lifts were all fully refurbished and external works consisted of but were not limited to new block pavers, creating a feature roundabout, new signage and a striking canopy entrance including feature lights. We also installed a modern wood and glass cycle hut.

A beautiful reception area was created that included a feature bespoke Corian reception desk, elegant furniture and furnishings, feature lighting, a stunning fabric effect wall and a impressive Armourcoat 3D sculptural textured wall. The works were completed to an extremely high standard and the project had a value of circa £1.9 million.